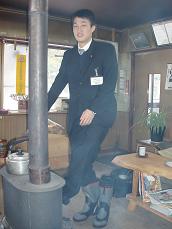 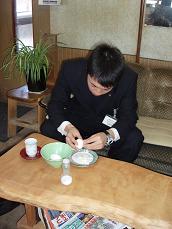 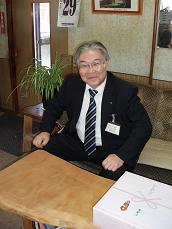 In introducing Yotaro Muraguchi (a.k.a. Yotaro in the
Forrest) and what he is all about I feel that it is best to present
exactly what I wrote the first time I encountered his outfit. That is the
only way to communicate a pure and honest first impression. So
without further ado, I offer the reader my musings of Friday, October 15,
2004:

Santa Land may be in Iwasaki Village, but J-Santa’s little
workshop is right here in Kazamaura. 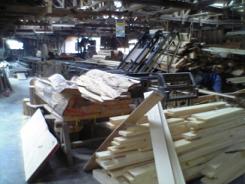 At first glance Muraguchi Industries may look like any
other lumber mill, 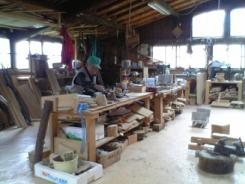 . . . but another quick glance to the left reveals
it’s true function as Santa’s secret lair in Japan. It turns out that
during the year he shaves and disguises himself as an
eighty-four-year-old Japanese man. 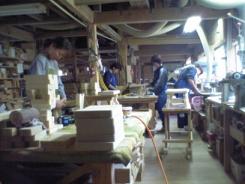 As children of the post-modern world I would expect
the readers of this page to be aware that Santa’s elves, like
everything else in this world,
are really social constructs of our patriarchal
legacy. They have been constructed from the women folk of Kazamaura fortunate enough to be indentured servants to Santa rather than to the squid racing or onsen industries. 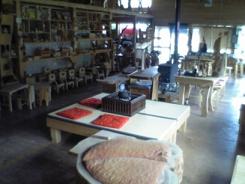 Santa’s manager, and the genius behind Muraguchi Industries, is Mr.
Yotaro Muraguchi, creator of the Yotaro in the Forrest collection. I
consider this man and his outfit to be a Kazamaura
village treasure transcending in value our famous Shimofuro
onsens, our squid races, and even our abalone radar shield. Apart from
Santa, all his employees (elves) are women because "men are
generally clumsy and inattentive to detail." (Actually, he currently
employs a number of men
as well). 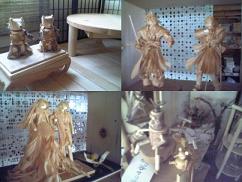 Yotaro in the Forest’s display room is impressive to say the least. 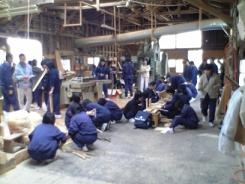 . . . and his furniture are all marketed in expensive
specialty stores
in Tokyo and other large cities. 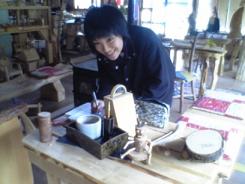 Fortunately, the powers that be at Kazamaura Junior
High School have been wise enough to tap into all that Mr. Muraguchi
has to offer, and so several times annually Mr. Muraguchi graciously hosts all the third year students in one of the many nooks in his mill. 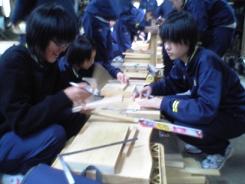 After finding inspiration in the display room . . .

. . . they select whatever wood they need to make
whatever they want to make. In deference to Mr. Muraguchi’s love of
women, I will for the most part only show photos of girl students in this post . . . (tongue in
cheek, of course) 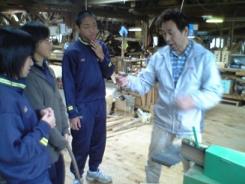 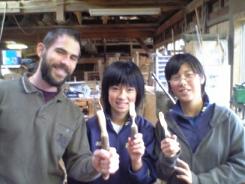 Here I am showing off my left handed wooden spoon
(alas, I am right handed) which I made as a warm up for my real
project–whatever that’s
going to be. The girls are planning to make butter knives and
forks as well, so as to have complete sets. There is something tremendously satisfying about creating
wooden artifacts with one’s own hands. I
remember that I derived great
pleasure while growing up from creating bows and
arrows, wooden mounts
shaped like rifles for my slingshots, and other
semi-lethal weapons. As
for Mr. Muraguchi himself, he is a very sociable craftsman, and
when he isn’t
surrounding himself with junior high girls (who tend
to congregate
around him) or working in his mill, he is hosting his
Sunday Wooden
Craft Club open to the public on Saturdays and Sundays
(except on the
third weekend of each month). It only costs 1,000 yen
per year plus the
cost of materials, and I would highly recommend it to
anyone interested
in wood working or hanging out evenings with a great
local artist over a
few beers.

It has now been over a year since I first visited the Muraguchi’s and hardly a week goes by without my wife and I joining them for dinner and an evening chat.  I think that the reason we enjoy his company, and the company of his wife, so much is that he is striving to understand that question that occupies my mind also: "How should we then live?"  This question takes us through a broad range of topics from creativity to education to sustainable living to child rearing to the nuclear facilities springing up in the towns and villages around us . . .

It is my intention through this "English Corner" to introduce to non-Japanese readers how Yotaro Muraguchi’s philosophy of living in harmony with the natural creation surrounding him interacts with his occupation of fashioning his own creations out of Aomori hiba wood.